Objective – To investigate various test methods for the characterisation of physical properties of muco-adhesive polymer films adhered to tissue in the development of novel polymer-based soft-tissue grasping technology for atraumatic retraction of bowel and solid organs during laparoscopic surgery.

Method – Polymer films (Carbopol-based formulations) were cast in 60 mm diameter Teflon moulds and air dried at 50 °C. These were placed on and adhered to the serosal layer of ex-vivo porcine bowel placed in a 37°C water bath for tensile testing by an Instron tensiometer. The retraction force, required for bowel manipulation, is reported to range from 2.5 – 5 N. The adhesive properties of the polymers were evaluated by following tests: (i) endurance of the adherence of the polymer to the bowel, (ii) interval retraction with peak force, (iii) simulated surgical retraction procedure by random retraction sequences, and (iv) incremental retraction force to determine maximal adhesion force. Mechanical properties, such as tensile strength and modulus of the adhered muco-adhesive polymer films were also evaluated.

Results – A 30 mm diameter retraction probe was attached to the serosal-adhered polymer at one end with the other end being connected to the load cell of the Instron tensiometer. For (i) the polymer adhered bowel was successfully retracted to 2.5 N and held for a duration of 10 min before return baseline and then followed by the same retraction repeated 12 times for a total duration exceeding 120 min. For (ii) the bowel was successfully retracted to 2.5 N, then to 5 N before returning to 2.5 N (each for 1 min) and finally to the baseline demonstrating, during which cycle the polymer maintained adherence to. For (iii) the bowel was successfully retracted to variable positions with forces of 1.5, 3, 5, 2, 1, and 2.5 N sequentially with holding durations of 0.5, 1, 0.5, 0.5, 1 and 5 min. For (iv) incremental increase of retraction force of 1N in steps of 0.2 min duration demonstrated maximal adhesion at around 6 – 8 N at which point the probe and tissue started to separate. The tensile strength was 5.23 MPa with Young’s modulus of 182.66 MPa for the tissue adhered polymer, compared to the dry polymer specimen of 13.66 MPa (with modulus 307.73 MPa).

Conclusions – Muco-adhesive polymers can adhere to the serosal side of the bowel with an adhesive force that is sufficient to lift the bowel for a long period of time and for effective surgical retraction. By increasing the polymer mechanical strength during hydration and by improved polymer-tissue bonding interface, further reduction in device dimension is possible for MAS procedures. Our on-going R&D is to embed magnetic material to generate magnetic muco-adhesive polymers for bowel and solid organ retraction by magnetic probes. 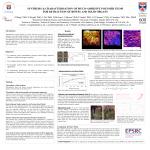