Discussion: This study provides a quantitative analysis of team composition and clearly demonstrates that frequent changes of core team members have a measurable and negative impact on the surgical time for both open and laparoscopic procedures. These results support the need to optimize operating room management strategies; specially better team management (i.e., designated staffing), and better intra-team communication in order to improve efficiency in the operating room. 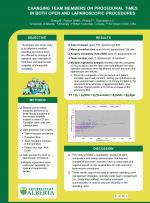