Introduction: An anatomical compression of celiac ganglion and axis by the diaphragmatic crura and the median arcuate ligament, a fibrous arch anterior to the aorta causes celiac artery compression syndrome or median arcuate ligament syndrome (MALS) which is an uncommon disorder. It occurs in young to middle age adults, while it has been elaborated in infants and children. MALS is treated with surgical strategy such as arterial bypass, open or laparoscopic or robotic assisted median arcuate ligament (MAL) release, endovascular treatment with stent placement or angioplasty, or combination of these techniques to reestablish sufficient blood flow. We report a case of 57 year old symptomatic patient with angiographically confirmed MALS who was treated with laparoscopically MAL release in tertiary care hospital and had no symptoms.

Case Report: A 57 year old white female presented with post prandial abdominal pain since one year. Physical examination was not significant except for abdominal examination associated with tenderness and fullness in the well located area to the right of midline that was markedly worsen with deep inspiration.Magnetic resonance angiogram (MRA) of abdomen with and without omniscan gadolinium intravenous contrast was done and compared with CT scan abdomen and pelvis which showed high grade proximal celiac artery compression immediately after the origin with mild dilation of the celiac artery distally. The Stenosis was respiratory dependent. laparoscopic release along with robotic assisted cholecystectomy due to having gallbladder polyp were performed. She was discharged at 5th day post operatively with no complications were observed.

Conclusion: In the above case, we presented a 57 year old symptomatic angiographically confirmed MALS patient who underwent laparoscopic surgery to release MAL and robotic assisted cholecystectomy for gallbladder polyp with excellent outcome. 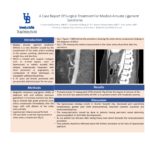