CARPE is a European Research Council (ERC)-funded proof of concept (PoC) project specifically for the development of a generic prototype of the next generation of active seeking flexible endoscopes based on the patented ‘active tether concept’ ATC [1]. The ATC consists of a serial chain of miniature compliant actuators (MCAs), each with two degrees of freedom (DoFs) forming an active hollow flexible robot with snake-like locomotion. The advantage of this technology, compared with the traditional flexible endoscopes, is its active independent joint complainant mechanism and a smart control, enabling continuous arbitrary shape change, able to provider pain free inspection, irrespective of the region of the Gastrointestinal tract, stomach, duodenum, small bowel and colon.

Most of the mechanical approaches used in the development of snake-like robots for medical applications, involve locating the actuators outside the robot and use of cable-transmission to control each joint. The disadvantage of this approach derives from the numbers of cables needed, limiting the number of actuating joints as otherwise the maximum outer diameter of the system, enabling safe and clinically tolerable endoscopy, would be exceeded.

CARPE proposes to use actuators inside the robot by means of shape memory alloy (SMA) wires because of their ability to achieve a high force to weight ratio even when of small gauge. Each joint adopts an independent actuator solution using SMA wires in antagonistic configuration and employing a compliant passive mechanism, thereby, reducing the energy consumption. The snake like-locomotion is achieved because each joint has two position and torque sensors, one for each DoF and a smart control board (SCB), which has a dedicated DSP (digital signal processor) to control the position and torque imposed by the locomotion control, together with an inertial memory unit (IMU) to monitor the orientation of the robot inside the bowel. Both, the mechanical actuation/transmission and the SCB are located in the outer part of the design, keeping the core of the chain empty, with an external diameter of 13mm and an empty central space of 5 mm, which will be used for essential services such as suction/irrigation and biopsy channel for a traditional biopsy or additional instruments.  The head of the robot will carry a HD camera (already developed) and the robot will be controlled by an external console.

A preliminary mechanical prototype has been manufactured using metal and miniaturised ball bearing to reduce the friction in the mechanical transmission achieving a total joint weight <1g and a high torque to weight ratio. An ad-hoc contactless miniaturised position sensor, located in the lateral part of the joint, was designed to reduce the overall size achieving a stable analogue output signal.

The tests performed with the CARPE’s preliminary miniaturised actuator prototype have confirmed the potential of the proposed robotic solution for the development of the next generation of active compliant self-seeking generic flexible endoscope. 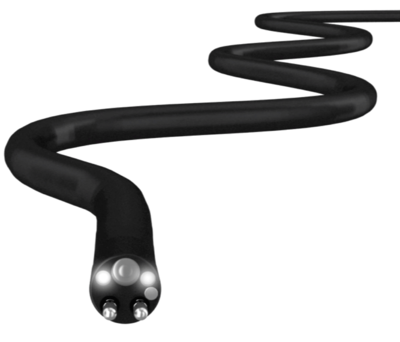