Methods:LAR (97 cases) or ISR (29 cases) was performed in 126 fStage1 rectal cancer patients between March 2007 and March 2014 at our institution and recurrence after surgery was occurred in 7 cases (5.6%).Patients were grouped by surgery into LAR and ISR group, clinicopathological factors related to recurrence were retrospectively analyzed. We also examined recurrent cases.

Results: As for all of 134 patients, mean age was 63(34-90) years old, maximum width of tumor was 29.7±17.9mm, pT1/T2 were 63/63 cases, recurrence after surgery was occurred in 7 cases (5.6%). Recurrence rate was significantly higher in ISR cases than in LAR case (p=0.0006). Clinicopathological factors related to recurrence was compared between two groups, significantly longer duration of surgery (p=0.0005), more blood loss (p=0.0413), and more venous invasion (p=0.0310) was observed in ISR group. In recurrent cases, mean age was 62(49-74) years old, maximum width of tumor was 28.6±16.2mm, Type 0/2 were 3/4 cases, wall invasion sm/mp were 2/5 cases, histologically well differentiated cancer were observed in 6 cases. Lymphatic and venous invasion was positive in each one and 4 cases.Recurrent sites were 2 anastomotic site (6.9%) and two lateral lymph node (No.263), one liver metastasis, and one lung metastasis in ISR group. In LAR group, 1 anastomotic site recurrence (1.0%) was observed. The period from surgery to recurrence was 21.7±9.7 months. Treatments of recurrence were surgical resection in five cases, chemotherapy for one case, and radiotherapy for one case. All patients are alive after surgery. 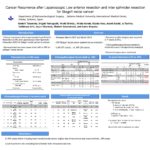