Can omentopexy at the time of laparoscopic sleeve gastrectomy help with long term postoperative nausea and nausea-related complications?

Introduction: Nausea and vomiting is a common complication after laparoscopic sleeve gastrectomy (LSG). We evaluated the potential benefit of performing an omentopexy to the greater curvature of the stomach as a method of reducing these symptoms postoperatively.

Methods: This is a retrospective cohort study of 132 patients that underwent LSG with and without omentopexy between 10/2014-8/2015 at a single hospital. Only patients that had follow up visits up to one year postoperatively were included in the final analysis (n=130). Of these, 57 patients underwent omentopexy (Group 1) and 73 didn't (Group 2). The two groups were compared in regards to postoperative nausea requiring medical attention and other nausea-related outcomes (anti-nausea medication doses, emergency room (ER) visits and hospital readmissions). Statistical methods included t-test and x2-test, used as appropriate. p<0.05 was considered statistically significant.

Conclusion: Our findings indicate that omentopexy at the time of LSG does not significantly reduce postoperative nausea and nausea-related complications. However, no hospital readmissions after 30 days from surgery were noted in patients that had undergone omentopexy at the time of LSG when compared to those who did not. Further studies may elucidate the potential long-term benefit of omentopexy during LSG on postoperative nausea. 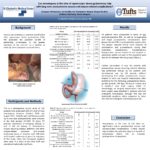