Introduction: Gastrectomy and diversionary gastroduodenal procedures can improve type 2 diabetes (T2D). Colorectal resection alters intestinal microbiome and might be associated with favorable hormonal changes. The aim of the study was to study the possible evolution of T2D in patients who underwent colectomy.

Methods: All patients with T2D who underwent colectomy for benign diseases from 2004 to 2015 at a single academic center who had at least 1-year postsurgical follow up were identified. We excluded patients with colorectal malignancies, inflammatory bowel diseases, and patients on immunosuppressive medications. Baseline characteristics, pre-operative and post-operative BMI, glycated hemoglobin (HbA1c), and diabetes medications were collected. Data was summarized as the median and interquartile range (IQR) for continuous variables and as counts and percentages for categorical variables. A paired t test and Wilcoxon signed-rank test were used to calculate the difference between the last follow up point and baseline at the time of surgery. Two dependent proportions were compared with Z-test.

Conclusion: Data of this exploratory analysis indicate that colectomy is not associated with significant improvement of T2D. 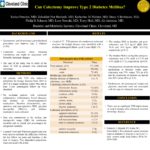