Can a permanent stoma rate still count as a quality indicator of rectal cancer management in the era of modern surgical practice?

Aim: The aim of this study is to evaluate the rate of formation of stoma versus restorative surgery in a DGH where all cases are discussed preoperatively following appropriate staging.

Method: Retrospective study for all patients diagnosed with rectal cancer and underwent curative resection between May 2010 and January 2012.

All patients were discussed in the colorectal MDT meeting and the MDT decision was followed in 87 patients. Two patients (2.2%) had surgical decision changed intra-operatively to low Hartmann’s procedure due to cardiovascular instability and technical stapling difficulty respectively.R0 resection rate was 90%

Conclusion: Restorative resection rate per se (low permanent stoma rate) for low rectal cancers continues to be regarded as a national surrogate marker of surgical quality. Whilst an outcome audit is the best performance indicator for a DGH colorectal unit, due consideration should be given to prevalence of ultra low rectal cancers in certain demographic areas, site of the tumour, preoperative poor sphincter function and patient fitness Permanent stoma may not necessarily be a true depiction of quality of surgical care especially in the present era of MDT approach where management plans are made preoperatively. 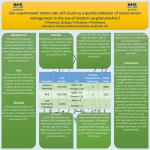