Campaign for greater safety in laparoscopic cholecystectomy in Denmark.

Method: In June 2016 a survey was conducted at a symposium about the surgical treatment of gallstones in Central Denmark Region. In the first part of the survey participants were asked questions about their knowledge and implementation of Danish and Tokyo guidelines in everyday practice together with questions about age, sex, experience, estimated number of performed cholecystectomies, and their experience of severe complications such as bile duct injuries and bile leaks. In the second part of the survey the strategies suggested by the SAGES Safe Cholecystectomy Program were presented, and the participants were asked to assess the importance of those strategies according to their personal experience on a scale from 0 to 9, 0 being completely irrelevant and 9 being absolutely crucial. Answers given by residents and attendings were then compared.

All participants agreed that the strategies suggested by the SAGES Safe Cholecystectomy Program were very important with the average score varying from 7.45 to 8.65 among attendings and from 7.53 to 8.95 among residents. 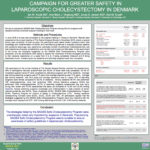