Burst Pressures in Gastric Closure – a NOTES Comparison Study of Looped T-Anchors vs. Endoclips in the Explanted Porcine Stomach

Background: A reliable, secure closure of the gastrotomy remains a fundamental challenge in transgastric NOTES procedures. Gastrotomy closure using endoscopic clips is unreliable, technically difficult, and expensive. Few tests of the integrity of these closures have been published. We compared burst pressures in gastric explants utilizing looped T-anchors and endoscopic clips.
Methods: In nine explanted porcine stomachs in an Erlangen Model, we made two gastrotomies in each stomach, 8-10 cm apart, on the greater curvature near the gastrocolic ligament. The gastrotomies were created with endoscopic needle knife cautery, and were enlarged until a 10-mm gastroscope could be pushed through them. One gastrotomy was closed from within using mucosal clips; the other was closed with T-anchors modified with a metal loop in the center allowing purse string closure with along a single 2-0 nylon suture, placed transmurally using a 19-gauge endoscopic needle. Four T-anchors were placed sequentially, on the same suture, for each gastric closure, arrayed in a square around the gastrotomy site. The gastrotomies were closed transesophageally by pulling tension on the free ends of the suture through a pushing catheter, and securing the tie with a friction-fit collar and a crimping device. Integrity of the closures was assessed by submerging each explant under water and inflating until gas leakage occurred. Pressure gradients across the gastric wall were recorded using a digital manometer. Leak pressure was recorded for the device that failed first. The leaking site was then oversewn with 2-0 silk, allowing failure pressure of the other device to be measured.
Data: The mean transmural pressure gradients (mm Hg) at failure are shown here:
Clips: 8 4 6 2 2 42 4 2 56 Mean = 14
T-anchors: 11 42 10 32 17 20 35 56 23 Mean = 27.3
Comparison of the means was not statistically significant (p=0.058), but would have in a larger series. Using 10 mm Hg as a threshold value for secure closure (at this pressure the explants are quite firmly inflated), it can be seen that 7 of 9 clip closures failed to meet the threshold value. All 9 of the T-anchor closures exceeded the threshold value (p = 0.0023, two-tailed Fisher exact test).
Conclusion: A transmural, purse-string, T-anchor closure is superior to clip closure in gastric explants. An in-vivo survival study is planned to test this method further. 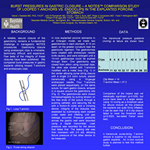