Introduction:
The disadvantage of endoscopic surgery (laparoscopic surgery, NOTES, etc.) is the narrow operative field provided by a single endoscope. The broad-view camera system (BVCS) has been developed with the aim of providing a wide-ranging view by using miniature camera units located on the inside of the patient’s body. The BVCS can automatically record not only the overview of a surgical operation but also the movements of the surgical instruments by using quantitative analysis based on image processing.
Methods/Procedures:
The BVCS consists of several camera units, a display, and a PC. The newly developed camera unit is composed of a small CMOS camera (8.7 x 8.7 x 10.0 mm) and an indwelling needle for fixing to the body wall (phi 0.8 x phi 1.3 x 100 mm). In a preliminary animal experiment that simulated laparoscopic surgery, a single camera unit was used to verify the feasibility of the BVCS. First, the camera unit was inserted through a 10 mm trocar. Next, the needle was punctured up to the abdominal wall of the pig by using forceps and the unit was fixed on the inner wall of abdomen. Subsequently, the 3 wires of the camera (image signal, 12 V, and GND) were pulled through from the needle protruding from the pig’s body, and connected to the display and the PC.
Results:
The visualized area using the BVCS was approximately 6 times larger than that visualized using an endoscope. Through the operation, the endoscope, the 2 forceps, and the colon of the pig were continuously monitored. It was confirmed that the trajectory of forceps can be detected in real-time by a PC that processes the captured images. During this experiment, lens of the camera did not mist over because of the surgical conditions such an incision with a radio knife.
Conclusion:
We confirmed the usability of the BVCS in animal experiments. We think that the proposed system has momentous potential for use as a visual-navigation system during endoscopic surgery. In the future work, several camera units will be used in preclinical experiments. 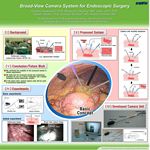