Introduction: Laparoscopic Minigastric bypass involves a single billroth type 2 anastomosis between the created neogastric pouch and the jejunal loop 150-250 cm from the duodenojejunal flexure. According to western experts there is significant risk of bile reflux gastritis with MGB bypass due to the omega loop with biliary secretions going into distal loop via the neo-stomach. Normally bile is present in the stomach constantly due to physiological reflux .Patients with an ulcerated mucosa with active gastritis when subjected to bile reflux cause the stomach to become irritable and contract, thereby cause upward propulsion of the bile towards the gastro esophageal junction causing symptoms of reflux. Therefore symtoms attributed to alkaline gastritis are actually due to peptic gastritis which is present in the patients preoperatively. Patients with gastritis pre operatively ought to have symptoms of bile reflux. Aim of our study was to follow up patients without gastritis preoperatively who underwent MGB to confirm etiology of the reflux attributed to MGB.

Methods: 250 morbidly obese patients were screened from 2002- 2008 in our institution.220 having normal oesophogastroduodenoscopy (OGDscopy) underwent MGB and were followed up for a minimum period of 8 yrs for symptoms of reflux using baylors reflux symptom index(score>13 is suggestive of gastritis) Repeat OGDscopy was carried out at 2,4 ,6 and 8 yrs interval to look for newly developed gastritis which would be attributed to alkaline bile reflux. Anastomotic leak occured in 5 patients but were minor leaks managed conservatively.

Conclusion: Patients having undergone Laparoscopic mini-gastric bypass did not have significant alkaline bile gastric reflux. Bile reflux gastritis was seen in patients with marginal ulcers having ulcerated mucosa with minimal incidence in those with normal mucosa and without co existent gastritis. Alkaline bile gastritis attributed to MGB seems to be due to previously present peptic disease. 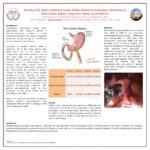