Back ground: Laparoscopic Heller-Dor surgery (LHD) is widely performed as the gold standard treatment for patients with achalasia. The most patients with achalasia suffer from body weight loss since dysphagia, the chief compliant of this disease is associated with disturbed oral intake. According by, the analyses of surgical outcome for LHD in view of body mass index are rare. The aim of this study is to clarify the effect of body weight on the surgical outcome of LHD.

Results: The average age was 43.8±14.7 and mean BMI was 20.3±3.1 in our patients. Average BMI was18.0±1.5 in group A, 21.8±1.3 in group B,and 28.2±4.0 in group C. Group A was significantly younger (p=0.026) and had significantly greater proportion of female gender than the other two groups (p=0.002). There were no differences in operation time, blood loss, and the rate of mucosal injury between the three groups. Also, the post-operative symptom score and the satisfaction score were comparable. In addition, the occurrence of reflux esophagitis after surgery was not significantly different between the three groups.

Conclusion: The surgical outcome of LHD and post-operative symptoms in patients with achalasia were not affected by body mass index (BMI). 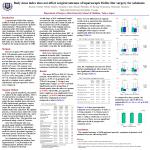