Objective: Vaginal cuff closure is a technically demanding task during laparoscopic hysterectomy. Obstructions from the pelvic bone and lack of dexterous tools increase the difficulty for many physicians. Robotic platforms such as the da Vinci Surgical System, have increased adoption of laparoscopic techniques by simplifying tissue approximation, knot tying, and suturing of the vaginal cuff. However, even in robotic cases, suturing remains a demanding task considering inconsistent suture placements can cause rupture, complications, and reoperation.

We present a novel surgical robot, STAR, capable of performing autonomous anastomosis of the vaginal cuff. Previously, we demonstrated the advantage of semiautonomous control with STAR to create a more consistent, leak free bowel anastomosis. We hypothesize the accuracy of STAR can be used in autonomous cuff closure, to reduce complication and reoperation rates associated with hysterectomy.

Description: STAR is the first surgical system to perform semi-autonomous tasks in soft tissue. By leveraging a multimodality vision system, articulated suturing tools, and surgical planning algorithm, STAR can localize and anastomose target tissue. To complete autonomous cuff closure, a second robotic arm with mechanized grasping tool was integrated with STAR (Fig. 1a). Both arms were programmed with collaborative, laparoscopic motions to apply sutures (white robot), and manage suture length (orange robot). To demonstrate a proof of concept, STAR performed laparoscopic cuff closure in an acute porcine model (n=1). The vaginal cuff was prepared by laparoscopic dissection from the uterus, and suspended by transabdominal stay sutures (Fig. 1b). STAR visualized the vaginal cuff via longitudinal cut from pubis to umbilicus to generate a surgical plan (Fig. 1c). After calculating the number, location, and spacing of stitches, STAR performed autonomous closure of the vaginal cuff using barbed suture (Fig. 1d).

Results: Our team successfully designed, and integrated, a second robotic arm with multi degree of freedom grasper into the STAR system. When run in autonomous mode, both arms carry out a collaborative surgical task within a 2x2x20cm work space. When mechanized, the universal grasper has positional resolution of 0.001°, pitch between 0-70°, and achieves 360° rotation of the distal tip. STAR successfully completed an autonomous laparoscopic cuff closure in an acute animal model. Three stitches were used to complete the anastomosis, with average stitch spacing of 2.75±0.43mm and rupture force greater than 10N. Total anastomosis time was 5.43min.

Conclusion: To the best of our knowledge, STAR is the first robotic platform capable of performing an autonomous task in soft tissue. Results from the acute animal study indicate that collaborative, laparoscopic motion between two robotic arms can create a consistent anastomosis with rupture force exceeding clinical requirements. A comparison study to demonstrate equivalence to clinical standard of care is ongoing between STAR and surgeons. While additional development and testing are necessary, this case study illustrates feasibility of autonomous robotic surgeries. 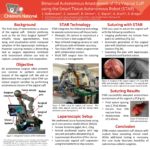