A 52 year old woman presented with abdominal discomfort and jaundice for 1 month. Discomfort was in upper abdomen, did not have any periodicity and was non-radiating. She noticed high colored urine a month ago. There was no pruritus or pale stools. She had low grade, intermittent fever. She reported anorexia and had lost 20 kilogram weight over the last 1 year. There was no gastrointestinal bleeding. Stools were normal. She did not have any comorbidity. She did not undergo any operation in the past. She frequently looked after a cat that was living near her house.

Clinical examination revealed a moderately nourished woman, who was icteric. There were no signs of liver cell failure. There was no supraclavicular lymphadenopathy. Abdomen was not distended and was soft. Non tender hepatomegaly was present. There was no palpable mass. There was no clinical evidence of free fluid in abdomen. Examination of other systems was unremarkable.

We performed left hepatectomy with segment 5 liver resection with resection of extrahepatic biliary tree and did cholangiojejunostomy to right sided sectoral ducts. Operating time was 8 hours and 30 minutes. Blood loss was 400 ml and we gave 1 unit blood transfusion. Patient recovered uneventfully. Biopsy showed biliary cystadenoma in liver with a solid component extending into hilar biliary confluence and obstructing it. 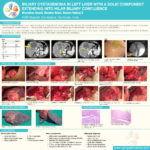