Results: The time period of this study was December 2007 to September 2009. There were 101 upper endoscopies performed in 86 patients. Repeat endoscopies were performed for retained food particles or re-evaluation of a mass/ulcer. There were 11 (12.8%) patients that had pathological evidence of Barrett’s esophagitis. All patients had Barrett’s metaplasia and no patients had dysplasia.

Conclusions: Barrett’s esophagitis is seen a higher incidence in the bariatric surgery population than the normal population. The pathophysiology of this increased incidence should be explored. Additionally, these data suggest routine endoscopy in morbidly obese patients may be indicated. Lastly, further research should focus on the true clinical implications of the findings of Barrett’s metaplasia in this patient population. 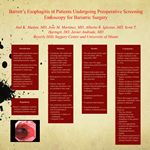