Bariatric Surgery Is Safe with Good Outcomes in Elderly Patients: A Retrospective Analysis

METHODS AND PROCEDURES: A retrospective review of our institute’s bariatric dataset was done from January 2010 to June 2016. Patients aged 60 and above were identified as elderly. Data was analyzed for age preoperative and follow up body mass index (BMI) and comorbidities. Analysis was done using SPSS software. Student t test was used to compare means.

RESULTS: Total 127 patient were identified as elderly. The mean age was 62.9 years (60-76 yr). Eighty-one percent were female and 19 % were male. Ethnicity wise 18% were African American, 19% were Caucasian and 62% were Hispanic. Average preoperative BMI was 43 kg/m2. All procedures were done laparoscopically. Out of total procedures, 54 % were laparoscopic roux-en-y gastric bypass, 14 % were laparoscopic adjustable gastric band and 32% were laparoscopic sleeve gastrectomies. Average length of postoperative stay was 2.25 days. Thirty-day morbidity was 8.5 % and 30-day readmission was 3%. There were no mortalities and no DVT or PE reported. The most common reason for readmission was dehydration. Mean total weight loss at one year was 70 lbs. Mean excess body weight loss in percent was 50%. Average weight loss in terms of BMI at the end of 1 year was 34.8 compared to 43 with (p<0.05). 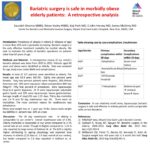