Assessment of the Outcomes of Hand-Assisted Laparoscopy Vs. Laparoscopy in Elective Colorectal Surgery in Obese Patients – Are There Advantages?

Introduction: Obesity has been challenging for both laparoscopic (LA) surgery and hand-assisted laparoscopic (HAL) surgery. The aim of this study was to compare the outcomes of LA and. HAL colorectal surgery in obese patients.

Conclusion: LA and HAL surgical approaches are comparable related to safety and feasibility in obese patients. The length of operation, estimated blood loss, the conversion rate and post operative hospital stay were decreased in HAL group while the length of incision was decreased and postoperative hospital stay was similar with LA group in successfully completed cases. Although HAL may be justifiable in this group of obese patients, the majority of patients who undergo LA surgery can still benefit from a significantly smaller incision. 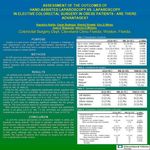