Objective: The aim of this study was to assess completeness of anastomosis after transanal total mesorectum excision (TaTME) for rectal cancer.

Surgical procedure: Patient was placed in the lithotomy position with the arms parallel to the body. TaTME and laparoscopic TME were simultaneously performed with two teams. For TaTME, using the Lone Star Retractor System, a purse-string suture was placed through the rectal mucosa to tightly occlude the rectum with a 3 cm margin distal to the tumor. After irrigation with saline, a full-thickness rectal transection distal to the purse string was initiated circumferentially. The access device was inserted, maintaining pneumoperitoneum with carbon dioxide using an AirSeal platform. The mesorectum was mobilized, including the posterior dissection toward cephalad in the avascular presacral plane, proceeding anterior and lateral dissections to achieve circumferential rectal mobilization. For laparoscopic TME, after inserting trocars, medial approach was performed with mobilization of the splenic ?exure, previously described. Then, TME achieved until connecting TaTME. After completing an anastomosis, mucosal stain of anastomosis using ICG, full thickness of resected ring after anastomosis, air leakage test and hand sewn anastomosis were assessed to decide creation of diverting ileostomy. In the case of single staple technique, we put transanal.drain.

Results: Completeness of anastomosis were obtained in all cases. Twelve patients created a diverting ileostomy because of hand sewn anastomosis (n=10), incompleteness of resected ring after anastomosis (n=1) and poor ICG stain (n=1). Pathologic examination of specimens demonstrated complete mesorectal excision in all cases with negative CRM. Four patients (3 of ileus and 1 of deep SSI) had postoperative complications. There were no mortality. The mean operative time for TaTME and intraoperative blood loss were 150 min and 50 g, respectively.

Conclusions: Assessment of anastomosis and appropriately decided ileostomy ensure completeness of anastomosis after surgery, resulting in being a safe and feasible procedure of TaTME for middle and low rectal cancer. 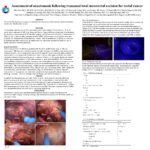