INTRODUCTION: Urinary retention requiring catheterization occurs in 2% to 7% of patients undergoing laparoscopic transabdominal preperitoneal (TAPP) inguinal hernia repair and in less than 2% of patients undergoing laparoscopic cholecystectomies (LC). Urinary symptoms post laparoscopic surgery have been poorly quantified. The American Urological Association Symptom Score (AUASS) for benign prostatic hypertrophy was used to compare the change in urinary symptoms from preoperative to 24- and 48-hour postoperative with these two procedures.
METHODS AND PROCEDURES: Men undergoing an elective TAPP inguinal hernia repair (n=134) were enrolled. A comparative group, LC (n=54) were also enrolled. The average age for TAPP hernia repair patients was 48.8 years (range, 20-87) and LC 54.7 years (range, 29-86) (p=.0091). All patients received inhalational general anesthesia with minimal variation in the anesthetic agents. One surgeon performed all procedures. Preoperative and postoperative 24- and 48-hr AUASS were obtained. The 24- and 48-hr AUASS were each compared to the respective preoperative baseline. AUASS was recorded as 1-7 mild, 8-19 moderate, or 20-35 severe. Descriptive statistics, Student’s t- test, multiple regression, and repeated measures were used to compare outcomes.
RESULTS: At 24 hr post surgery, AUASS increased significantly in both groups, indicating an overall worsening of urinary symptoms. At 48 hours, in the TAPP Inguinal hernia repair group, AUASS decreased or improved significantly from baseline, from moderate to mild (p=.0332). In the LC group, AUASS returned to baseline at 48 hr (Table 1). AUASS change at 24- and 48-hr between TAPP inguinal hernia and LC were not significantly different. No patient developed urinary retention. 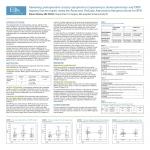