Introduction:
A recent Canadian study reviewed the effectiveness of colonoscopy. Colonoscopy reduced the death rate for left colon cancers, but not the right. Were right colon missed? Since the majority of colonoscopies were performed by non-gastroenterologists (69%), questions were raised as to who is qualified to perform colonoscopies.

Method:
A standard colonoscopy recording form was developed. It included verification of completion to the cecum, extubation time (time for inspection), polypectomy rate, and additional factors. 100 consecutive colonoscopies, performed by a single, rural general surgeon in a 3 month period (8/6/2008 – 11/5/2008), were entered on the form.
Data:
There were 52 males and 48 females. Age ranged from 18 to 95 years with an average age of 62.6 years.
The completion rate, verified by visualization of the ileocecal valve (96%) and/or visualization of the appendiceal orifice (75%), was 96%. Polypectomy rate was 47%. At least 29% had one adenoma removed, 13 had only hyperplastic polyps, 2 had serrated polyps, 2 had adenocarcinomas and 26 had multiple polyps. The average extubation time was 12.6 minutes. No extubation time was less than 6 minutes.
Conclusion:
Use of a standardized form with a commitment to thoroughness can produce valid colonoscopies.
References
Baxter NN et.al. Association of Colonoscopy and Death from Colorectal Cancer. Annals of Internal Medicine, 150:1-8, 2009 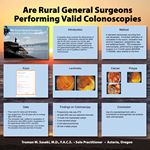