INTRODUCTION: It is not clearly documented in the literature whether laparoscopic appendectomy for phlegmons is destined to a high rate of conversion to open surgery or not. The aim of this study is to concentrate on the rate of conversion, and the factors that contributes to it.

METHODS AND PROCEDURES: A retrospective analysis of a prospectively collected data in a major governmental hospital from year 2000 till April 2011. We identified 125 cases of appendiceal masses out of 2358 laparoscopic appendectomies performed during the study period (5%). One patient was excluded from the study because of concurrent pregnancy. Statistical analysis used included Pearson’s chi-square and student’s t-test.

RESULTS: There were 76 males (61%) and 48 females (39%) in our study patients with an average age of 34 years (9-78 years). Twenty three percent of the patients had pre-existing medical comorbidities. Average onset of pain at presentation was 2.3 days (1-10 days), while surgery was performed on an average 2.7 days (1-11 days) from onset of pain. In 10% of the cases a mass was identified on imaging studies (US or CT), while it was negative in 42%, and the remaining patients (48%) were not imaged before surgery. A mass was felt in only 5% of the cases on physical exam. When onset of pain was 3 days or more, senior surgeons were involved more in the surgery than junior surgeons (65% versus 28%, P=0.001). Average surgery time was 72 minutes (20-150 min.). 19 patients needed conversion out of 124 (15%), (14 difficult dissection, 4 bleeding, and 1 due to injury to ileum). Conversion was highest when onset of pain was 3 days or more (32% versus 5%, P=0.001). Conversion to midline incision was in 21%, and the remaining through incision at McBurney’s point. Post-operative complications developed in 8% of patients after laparoscopy and 29% after open surgery (P=0.02), and developed more in patients with pre-existing medical comorbidities (28% versus 6%, P=0.003) (Ileus 42%, Pneumonia 25%, myocardial infarction 8%, pulmonary embolism 8%, Wound infection 8%, pelvic abscess 8%, and no case of surgical site infection, leak, or post-operative bleeding). Post-op diet was started later when patients developed post-operative complications (4 days versus 2 days P=0.00). Average hospital stay after laparoscopy was 4 days while that after open 6 days (P=0.02).

CONCLUSIONS: Laparoscopic appendectomy can be successfully performed in 85% of the cases of appendiceal phlegmons. There was a higher chance of conversion to open when onset of pain was 3 days or more. Laparoscopy significantly decreased post-operative complications and hospital stay. The reason for the low conversion rate in our study could be attributed to the more involvement of senior surgeons in this kind of cases. 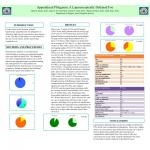