Analyzing the Benefits of a Minimally Invasive Esophagectomy for Esophageal Cancer in a Veterans Affairs Medical Center.

Methods: The Veterans Affairs Tumor Registry was queried for patients with a new diagnosis of esophageal cancer who were also treated at the Washington, DC VAMC. Patients who were eligible for surgical resection were cross referenced through the Veterans Information Systems and Technology Architecture (VISTA) and Computerized Patient Record System (CPRS) during the time period between 2003 and 2016. Clinical and pathological data was reviewed retrospectively and statistical analysis was performed using independent sample t-tests.

Results: Between 2003 and 2015, the Washington, DC VAMC Tumor Registry recorded over 130 individuals with a new diagnosis of esophageal cancer. Within this grouping, 27 patients were offered surgical resection and 18 patients underwent an open transhiatal or Ivor-Lewis esophagectomy, and 9 underwent an Ivor-Lewis MIE. The overall average stage of a Veteran diagnosed with esophageal cancer during this time period was stage three. Surgical candidates had an average stage less than two (T1-3, N0-1, M0) and non-surgical candidates had an average stage greater than three. Of the surgical candidates, 20-30% also had a stricture at time of diagnosis and 30-40% underwent neoadjuvant therapy. There was no difference in age, BMI, smoking status, or renal function at time of surgery between the two surgical groups however pre-operative albumin was higher in the MIE group (p<0.05). Patients who underwent a MIE had less blood loss, more nodes harvested (p<0.05) and required fewer transfusions (p<0.06) with no change in leak rate or operative time (p>0.05).

Conclusion: The Veteran population undergoing surgical resection for esophageal cancer may have superior operative outcomes with a MIE technique versus traditional laparotomy and thoracotomy. This initial pilot study documents that MIE is an effective procedure at a VAMC and should be offered for esophageal cancer at the VAMC. 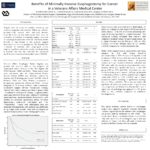