INTRODUCTION: We have been reported that analysis of systemic inflammatory indicators showed lower responses after laparoscopic assisted distal gastrectomy (LADG) compared with conventional open distal gastrectomy (ODG)(Hayashi et al., Surg. Endosc., 2005). In order to analyze factors contributed to the lower systemic inflammatory response in patients after LADG, both peritoneal and systemic immune response were measured and compared between patients after LADG or ODG. METHODS AND PROCEDURES: Thirty-one gastric cancer patients who underwent distal gastrectomy, at the Chiba University Hospital, between Novermber 2007 and September 2008, were enrolled. Fourteen were LADG and 17 were ODG. Changes of serum C-reactive protein (CRP) levels and Interleukin 6 levels of peritoneal drain fluid were measured and compared between the groups. RESULTS: Operation time was 315 } 44 minutes for LADG and 229 } 66 minutes for ODG (p 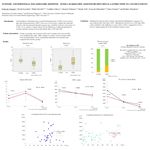