Aim: To evaluate the effectiveness of an integrated 2-day standardized laparoscopic surgery training course at a single center in Kyushu University. The skills assessments at the beginning and at the end of the course were analyzed.

Methods: The 2-day standardized laparoscopic surgery training course that is composed of lectures, box training, virtual reality simulator training and live tissue training has been held on a monthly basis since the minimally invasive surgery training center was established in January 2004. The backgrounds of the trainees were subject to analyses. The skills for laparoscopic surgery of the trainees were assessed by our originally-developed skills assessment task based on laparoscopic suturing and knot-tying in box trainer. The manipulation time of the needle holders such as time spent holding the needle, knot-tying time, and the number of completed sutures , etc. were recorded. To assess the precise handling of the needle holders, errors such as the numbers of sutures out of the targets, and the rubber sheet injuries, etc. were recorded. A three-dimensional electromagnetic tracking system (AURORA; Northern Digital Inc. Canada) was used to analyze the spatial path length and average tip speed of the needle holders. The recorded data of the tasks at the beginning of the course were compared with those at the end of the course.

Conclusions: We have developed an integrated training program and gathered the most cumulative trainees which have never been seen. While suturing and knot-tying can get faster within a short space of time, mastering precise techniques for fundamentals of laparoscopic surgery may further be needed a consecutive training. 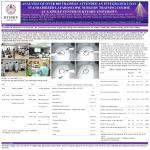