We present a case of coincidence of primary hepatic neuroendocrine tumors and gallbladder adenocarcinoma in a 67-year-old woman. She had a 1-month history of intermittent epigastric pain. Her past history was not significant and physical examination was unremarkable. Routine laboratory tests such as complete blood count, liver function tests and tumor markers were within reference range except for the CA 19-9 (55.36 U/ml). Computed tomography revealed irregular thickening of gallbladder wall and several low-density hepatic tumors with ring-enhancement after contrast-enhanced scan located in segment IV, V of the liver close to the gallbladder. Extended radical resection for gallbladder and middle lobe of the liver combined with skeletonized lymph node dissection of the hepatoduodenal ligament were performed. Histopathologic examination disclosed poorly differentiated primary hepatic neuroendocrine tumors G3 (PHNETs, neuroendocrine carcinoma) accompanied with moderately differentiated gallbladder adenocarcinoma invading the serosa layer. Immunohistochemical analysis confirmed the diagnosis. PHNETs were extremely rare with less than 150 cases having been reported in the English literature till now. To our knowledge, this patient may be the first case diagnosed as combined PHNETs and gallbladder adenocarcinoma. The diagnosis of PHNETs is difficult before resection or biopsy of the tumors. Syn, CgA and CD56 were specific and sensitive immunohistochemical markers for PHNETs. Although PHNETs have a relatively benign process compared with hepatocellular carcinoma, liver resection remains the most effective treatment for localized PHNETs.
Key words: primary hepatic neuroendocrine tumors; gallbladder adenocarcinoma 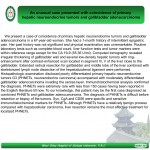