Multiple Endocrine Neoplasia-1 (MEN-1) is a rare hereditary endocrine disorder predisposing to tumors of pituitary gland, pancreas, parathyroid and gastrointestinal tract. A practical definition of MEN1 is a case with 2 of the 3 main MEN1-related endocrine tumors (parathyroid adenomas, entero-pancreatic endocrine tumors, and pituitary tumor).The mode of inheritance is autosomal dominant and has high penetrance. The MEN1 gene (MEN1) is located on chromosome 11q13 and is composed of ten exons that encode a 610 amino acid protein called menin that is important in regulation of cell growth, cell cycle and genome stability. 80% clinical and 98% laboratory manifestation is observed by the fifth decade. Hyperparathyroidism is the most common feature of MEN1 (90%) with pancreatic islet/neuroendocrine tumors (40-70%) and pituitary tumors (30-40% ) also commonly observed in MEN1 patients. Untreated patients have a decreased life expectancy, with a 50% mortality rate by the fifth decade mostly directly related to the syndrome and commonly from malignant pancreatic tumor and thymic carcinoids.

We report a case of MEN-1 diagnosed during preoperative workup for cholecystectomy for  cholelithiasis found on ultrasound. Elevated calcium and CT findings of para duodenal mass prompted the workup for this rare endocrine syndrome and patient was found to have significantly elevated gastrin and prolactin levels. Patient underwent total parathyroidectomy and enucleation of paraduodenal mass along with antrectomy, duodenectomy, cholecystectomy and gastrojejunostomy reconstruction. We did an extensive literature review for MEN syndrome. 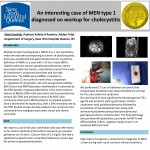