Objective
The aim of this project is to instrument a minimally invasive surgery (MIS) grasper to provide usage data such as applied force and manipulation duration in real time. No current system is in clinical practice to inform the surgeon of excessive grasping forces or durations. The proposed technology will contribute to current research on tool-tissue interaction and tissue damage in laparoscopic surgery, eventually leading to intelligent, truly atraumatic instrumentation equipped with active constraints to prevent excessive manipulation forces and modified polymer surfaces to improve tissue handling.

Description
The instrumentation ‘module’ uses sensors to measure the force applied to actuate the grasper jaws and their aperture displacement using a load-cell and potentiometer respectively. The module integrates into the body of a laparoscopic grasper and connects the grasper handle to the grasper shaft. In this prototype, a short fenestrated atraumatic grasper, which is commonly used in laparoscopic surgery, was selected. The sensors are connected to a computer data acquisition unit, and the data is logged using a bespoke LabVIEW program. Several configurations were considered for the optimum sensor location; due to size and robustness limitations of pressure sensors, placing them at the tool-tip would be complex. Sensors at the handle would provide a simpler solution but would be subject to large frictional losses in the handle mechanism. Therefore, by placing sensors along the shaft, only the frictional losses in the tool joints need to be determined. Real time force measurements and grasping durations are shown as manipulations occur.

Conclusions/future directions.
This is the first time grasping forces have been measured in a live animal model. The data demonstrates the variability of force and duration used to perform a simple laparoscopic task. A larger data-set will demonstrate a full range of grasping forces and the effects of inter-individual variability. Further research will measure the effects of average and higher end grasping forces on tissue by ultrasound and histological assessment. This data will also allow comparisons with modified grasping surfaces and allow the development of graspers with active constraints to be placed at a range of damage thresholds. 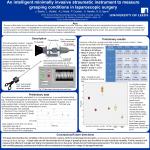