Adiponectin and Leptin in the Bariatric Patient

Background: Through relatively unknown mechanisms, bariatric surgery can resolve type 2 diabetes in morbidly obese patients. Potentially, pre- and post-operative changes in adiponectin and leptin expression are involved in this process. This study attempts to identify differences in gene expression in diabetic and non-diabetic patients undergoing bariatric surgery with regards to adiponectin and leptin.

Conclusions: Leptin and adiponectin are critical for glucose homeostasis and there are distinct genetic differences for these two hormones between diabetic and non-diabetic morbidly obese patients. Post-operatively, bariatric surgery can alter gene expression in morbidly obese patients to comparable levels of normal individuals. 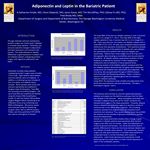