Adenocarcinoma of the duodenum: usefulness of intraoperative endoscopy.

It is well known that the adenocarcinoma of the duodenum is a quite rare lesion in fact represents 40% of cancer of the small bowel and 30% of these are localized in the peri-ampullary area: 7% affect the sub-papillary tract and only 3% the supra-papillary segment of the duodenum.

Our presentation concerns a 58 old lady, obese 107 kg with jatal hernia and GERD, lithiasis of gall bladder and an adenocarcinoma ex sessile adenoma ( 4x 4.5 cm) localized endoscopically in the anterior-lateral external wall of the supra-papillary tract of the duodenum.

The patient was previously treated for cancer of the right breast twice followed by chemiotherapy .

Normally these patients should be treated surgically performing a Wipple procedure in order to insure a radical operation. A pre-operative PET-TAC examination demonstrated the lesion of the duodenum without lymphatic involvement and no infiltration of the head of the pancreas. Intra-operatively it was clear that the duodenal lesion was localized in the supra-papillary area extending from the sub-pyloric tract to the proximal part of the second segment of the intestine. The dissection started with mobilizing the duodenum ( Cocker maneuver) and cholecistectomy; no evidence of infiltration of the peripheral tissue, in particular the dissection of the upper duodenum from the head of the pancreas was very easy.

An intraoperative duodenoscopy showed no involvement of the papilla and under direct endoscopic vision the duodenum was transected using a linear stapler. Part of big omentum resected and the left gastric artery divided. The stomach was resected and the exploration of the retroperitoneum didn’t show any lymphonode involvement. The operation was concluded performing a jejuno-jejuno anastomosis 30 cm below the residual duodenum and a gastro-jejuno reconstruction performed, according to Roux-Y procedure made with a long (50cm) defuntionalized small intestine.

So doing we avoided performing a Wipple procedure and the large gastro-duodenal resection will be beneficial for a obese patient with more than 40 BMI.
The post-operative period was very good and the patient was discharged 6 days after the operation.

In this case, according to our experience of 476 Wipple procedures of which 102 for duodenal cancer, the operation we choosed was objectively right and the intraoperative endoscopy very useful. The surgical procedure was performed in july 2013, now a  long follow up is needed. 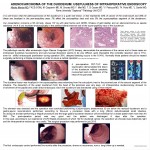