Introduction: The Fundamentals of Laparoscopic Surgery (FLS) program has successfully been used to teach and assess basic skills required to perform laparoscopic surgery. The more popular the FLS became, the score difference between surgeons and surgical trainees has been less significant. The purpose of this pilot study was to evaluate the impact of adding fragility to the FLS tasks’ models on the accuracy of assessing laparoscopic skills.

Methods: Minimally invasive surgeons (MIS) and general surgeons/surgical trainees (GS) completed modified FLS tasks; the peg transfer (PEG) task and the intracorporeal suturing (ICS) task, in addition to the original two tasks. The agar-based pegs were used for the modified PEG task and Kimwipes wipers (non-woven papers) were used instead of penrose drains for the ICS task. For the original tasks, scores were calculated based on the standard FLS scoring system (time and accuracy). In addition to the accuracy component of the standard scoring system, the degree of damages to the modified tasks was scored. Scores were compared between the MIS group and GS group using Wilcoxon signed-rank test. The correlation between modified task scores and original task scores was estimated using Spearman’s correlation coefficient. Data are expressed as median score and interquartile range.

Conclusions: The preliminary data shows that adding another component to the FLS scoring system can improve the accuracy of assessing laparoscopic skills. Increasing the fragility of the models could take the FLS manual skills assessment to the next level. 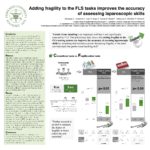