The majority (90%) of diaphragmatic herniations occur on the left side because of the protection offered by the liver on the right, and the relative weakness of the posterolateral aspect on the left side as it originates from the pleuroperitoneal membrane. A hernia that develops in this area is known as a Bochdalek’s hernia and usually presents at birth resulting from the failure of closure of the pleuroperitoneal canal.3 Traumatic diaphragmatic ruptures may be missed in up to 40-62% of cases and have been diagnosed 50 years later. These patients may present with multi-visceral herniation with or without signs of intestinal strangulation or cardiovascular collapse and may require immediate resuscitation and operative intervention.
We present here a case of pancreatitis secondary to an incarcerated diaphragmatic hernia in a middle-aged man with no known history of trauma that was repaired laparoscopically with mesh. He had a chest x-ray that revealed the presence of intestine in the left hemithorax and after a subsequent CT scan revealed an incarcerated left diaphragmatic hernia containing pancreas, spleen, and splenic flexure, as well as gastric volvulus he underwent laparoscopic reduction and repair of the hernia with mesh.

There are only a few reports in the literature of repairing diaphragmatic defects with incarceration of the pancreas in the thorax or mediastinum. Laparoscopic repair of diaphragmatic defects is an acceptable therapeutic option and obviates the need to open the abdominal or thoracic cavity in carefully selected cases, but should be considered carefully if solid organ or bowel injury is anticipated. It is very important to establish the diagnosis early and be aggressive with operative intervention as the morbidity and mortality can approach 20 to 50% with emergent surgery. 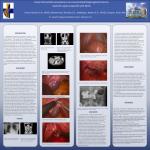