Acute Pancreatitis: A Rare Complication From a Migrated Gastrostomy Tube

: Percutaneous endoscopic gastrostomy (PEG) is a common modality used for primary and supplemental feeding for long-term external access. It is generally a safe procedure, however can be associated with many potential complications. Migration of the tube is one of the complications, rarely obstruction of the pancreatic duct is seen. We report a case of a 63 year old female nursing home resident, bed bound from severe Parkinson’s disease who had a (PEG) placed months previously and was send to the Emergency Department with abdominal pain, nausea and vomiting for the last 5 days. Serum Lipase was 5000 U/L. Imaging studies showed the tip of PEG tube with the inflated balloon in the second portion of the duodenum, causing occlusion of pancreatic duct and resultant pancreatitis. At her hospitalization she was placed NPO, the balloon was deflated and changed to a shorter PEG tube. The patient improved shortly after. Our case suggests that it is very important to secure PEG-tube at the level of skin and once the tract is well formed the balloon can be deflated. 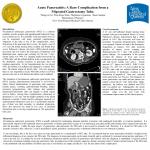