INTRODUCTION: Small bowel obstructions are a complication following a number of procedures, and a known possibility following bariatric procedures. Etiologies include internal hernia, adhesive disease, ileus, improper surgical technique as well as strictures. Less common, however, is obstruction the result of an intraluminal hematoma. We present a case of acute small bowel obstruction secondary to intraluminal hematoma in a postoperative Roux-en-Y gastric bypass patient, as well as our solution for surgical intervention.

METHODS: This is a single surgeon’s experience in management of an acute postoperative obstruction after a Roux-en-Y gastric bypass. Early small bowel obstruction was identified and intervention was performed by the surgeon with resident assistance. The patient was followed throughout his hospital stay as well as with follow up visits in the clinic. A retrospective literature review was also conducted via PUBMED-Cochrane database in regards to management of intraluminal hematomas in Roux-en-Y gastric bypass patients.

RESULTS: Patient is a 39 year old male who underwent a laparoscopic Roux-en-Y gastric bypass procedure for weight loss. The initial procedure was performed routinely without complications. On postoperative day 2, he developed nausea, hematemesis, bloody bowel movements and tachycardia. A CT scan was obtained showing obstruction of the Roux limb as well as the biliopancreatic limb secondary to an intraluminal mass at the level of the jejunojejunostomy. It was suspected that the patient had developed an intraluminal hematoma causing obstruction and the decision was made to return to the operating room. He underwent upper gastrointestinal endoscopy and diagnostic laparoscopy. The endoscope was unable to reach the jejunojejunostomy despite laparoscopic assistance. An enterotomy was made at the level of the jejunojejunostomy and evacuation of the hematoma was achieved. This resulted in resolution of the obstruction of both the Roux limb and the biliopancreatic limb. The enterotomy was closed primarily with suture. He recovered from the procedure and had an uneventful postoperative course following the case.

CONCLUSION: There are a number of possible causes for obstruction postoperatively, and while previously reported, an intraluminal hematoma is unusual. This diagnosis is important to include on the differential. In such a case, being aware of possible management strategies can help the patient avoid complication and morbidity. As such, the utilized technique proved successful and can be considered as one such management strategy. 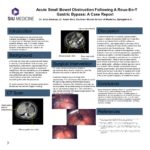