[Backgrounds] Since the first case of colon cancer surgery was reported, a laparoscopic treatment for colorectal cancer has become rapidly popular. A T1 colorectal cancer is thought to be a good indication for laparoscopic procedures because of the low risk of recurrence. However, since the lymph node metastasis rate of T1 colorectal cancer is around 10% and an accuracy of preoperative assessment of cancer depth is not satisfactory, care should be taken during the surgery for T1 colorectal cancer. The aim of this study is to clarify the accuracy of preoperative diagnosis of cancer depth and to assess the clinical outcome of these cases retrospectively. [Patients and Methods] During June 1999 and December 2007, 407 cases of colorectal cancer were operated laparoscopically. Of those 183 cases considered as T1 cancer preoperatively (cT1) were included in the accuracy study. Then 156 cases diagnosed as pathologically T1 cancer (pT1) were included in the clinical outcome study. [Results] Fifty- three cases out of 183 cT1 cases were additional surgery cases after EMR or ESD. Pathological distribution of tumor depth of cT1 cases were as follows; Tis 26 cases, T1 134 cases, T2 19 cases, T3 3cases, T4 1cases. The accuracy of preoperative evaluation is therefore 73.2%. Twenty- three (12.6%) cases were underestimated. In clinical outcome study, tumor localization of 156 pT1 cases were as follows; 15 in cecum, 23 in ascending, 13 in transverse, 6 in descending, 50 in sigmoid colon, 14 in rectosigmoid region, 35 in rectum. Their male-female ratio is 97:59 and a mean age is 64.6 year-old. Postoperative complications were found in 7 cases (4 anastomotic leakages, 2 wound infections, and 1 ischemic colitis). Regional lymph node metastasis was recognized in 20 cases (12.8%), and 2 of them had intermediate lymph node metastasis along the main feeding artery. Metachronous recurrence was found in 2cases. One patient who presented a cecum cancer with N2 lymph nodes metastases had multiple lung metastases and died 53 months after surgery. Another patient, who previously had EMR of a transverse colon cancer and underwent additional colon resection, developed liver metastasis and lung metastasis thereafter, in spite of no residue of cancer at EMR site and no regional lymph node metastasis in the surgical specimen. [Conclusion] Considering the accuracy of preoperative assessment of T1 cancer is around 70% and T1 cases potentially have intermediate lymph node metastasis or metachronous recurrence, extent lymph nodes dissection and long-term follow-up is necessary even for T1 colorectal cancer. 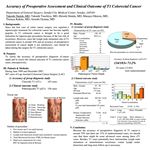