CASE: The patient was a 60-year-old female with a past surgical history of laparoscopic sleeve gastrectomy who presented at the emergency room with upper abdominal pain and vomiting for one day, associated with leukocytosis and left shift.  Serum total bilirubin raised up to 6.1 mg/dL on hospital day (HD) 3.  CT, ultrasound, and MRCP images confirmed a distended, wall-thickening gallbladder with pericholecystic fluid, and a significantly dilated CBD at 1.2 cm of diameter (Figure 1), without cholelithiasis or choledocholithiasis.  ERCP was unable to be completed due to the post-gastrectomy anatomy and the failure in cannulation into the ampulla which embedded in a large food-impacted PAD (Figure 2).  On HD5, the patient underwent a diagnostic laparoscopy and an intra-operative cholangiogram which confirmed a mildly inflamed edematous gallbladder, and a 3.8 x 3.8 cm2 large PAD with a narrow neck that was distorting the distal CBD (Figure 3).  Since the patient’s bilirubin level had been improving, we decided to only do a laparoscopic cholecystectomy.  Intraoperatively an anatomic variation of the cystic artery encircling the cystic duct (Figure 4) was also identified.  Postoperatively the patient recovered well during the thereafter inpatient course and at the postoperative 3-week outpatient follow-up.  The pathology of the excised gallbladder confirmed cholecystitis without cholelithiasis.

DISCUSSION: Lemmel’s syndrome is defined, in the absence of cholelithiasis or other detectable obstacle, by obstructive jaundice due to PAD.  Since Lemmel described this duodenal-diverticulum-obstructive jaundice in 1934, there still have been very few cases reported or investigated.  To date there is no report describing the association of acalculous cholecystitis with Lemmel’s syndrome. This patient’s mild acalculous cholecystitis probably attributed to the biliary obstruction and consequent gallbladder hydrops.  Her symptoms could be from either acalculous cholecystitis or intermittently worsening biliary obstruction.  In this case, the contribution of the anatomic variation of the cystic artery is unclear.  In the future, if this patient’s symptoms recur, the treatment plans for her will be sphincterotomy, removal of the impacted food in the PAD, or diverticulectomy. 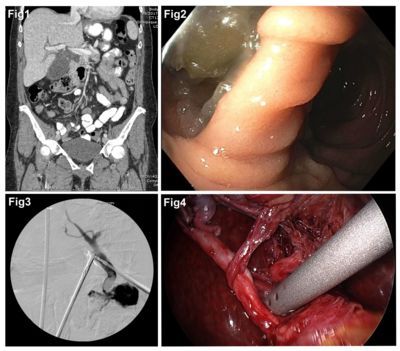