Background: Laparoscopic sleeve gastrectomy (LSG) is gaining popularity as a primary or revisional bariatric procedure with outcomes similar to the more commonly performed gastric band and gastric bypass. Staple line disruption and leakage after LSG is a significant source of morbidity and mortality. Surgeon practice with respect to staple line reinforcement varies considerably. The aim of this study is to retrospectively evaluate the effect of staple-line reinforcement on the gastric leak rate, overall morbidity, and mortality.

Conclusion: Our systematic review reveals lack of statistical difference for staple line leak in LSG with or without staple line reinforcement as well as other major complications. Due to restrospective bias and heterogeneity of studies and outcome variables, we also propose that strong, Level 1, prospective trials are needed to determine the true effect of staple line reinforcement on leak rates and overall morbidity in LSG. 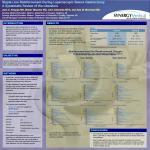