INTRODUCTION: Barrett’s esophagus (BE) is both a common disease and the single strongest risk factor for development of esophageal adenocarcinoma (EAC). It was long thought that BE progressed on a stepwise continuum from BE to BE with low-grade dysplasia (LGD) to BE with high-grade dysplasia (HGD) and finally EAC, but this relationship has recently come under question. HGD represents the highest-risk state for progression to EAC, yet there remains debate as to the optimal treatment algorithm and guidelines differ amongst subspecialists. Here we present a descriptive analysis of one institution’s clinical experience treating BE with HGD.

METHODS AND PROCEDURES: The host institution’s Clinical Query 2 database was interrogated for all patients who underwent interventions on pathology-proven BE without restrictions on the date of intervention. Nine hundred and three subjects were identified, of which 137 had unequivocal pathological diagnosis of HGD at the time of intervention. Patient charts were evaluated for a series of standardized clinical questions and responses were captured in a REDCap database. Descriptive statistics including means and standard deviations as well as distributional plots were used to evaluate the data using Stata v14 (College Station, TX).

RESULTS: There were no significant differences of the demographics and risk factors between patients undergoing endoscopic vs. surgical intervention excepting age, in which surgical patients were 5.9 years younger on average (p=0.03). Those who underwent radiofrequency ablation (RFA) exhibited a high rate of cure of both BE and HGD (69.3% and 89.3%, respectively) over a median follow-up period of 29 months. 28.9% of patients who underwent tissue-sampling interventions were upstaged to EAC after pathological review of the resection specimen. The post-intervention surveillance rate was 67.3% for patients treated with endoscopic therapies vs. 10% for surgical patients.

CONCLUSIONS: Ablative procedures are effective in eliminating both BE and HGD on follow-up endoscopic surveillance at rates similar to those previously reported. These data are encouraging for inferring long-term survival benefits from RFA of BE with HGD. Prospective longitudinal studies are needed to further evaluate the efficacy and durability of ablative therapies. This work demonstrates a paradigm shifting in favor of a more progressive role for RFA in the treatment of BE with HGD, and further suggests the need for coordinated multidisciplinary approaches involving both gastroenterologists and surgeons. 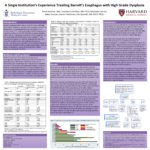