University of Hawai’i John A. Burns School of Medicine, Department of Surgery at Queen’s Medical Center

STUDY OBJECTIVE
We are conducting a retrospective study to determine the pre-operative medical and psychological predictors of “successful” and “unsuccessful” post-bariatric surgery patients. Successful weight loss after RYGB/LRYGB is defined as ≥ 50 %EWL at one year. Unfortunately 15-20% do not reach this benchmark [1]. Long-term failure rates of RYGB/LRYGB have been reported to be as high as 20-35% [2]. Given the significant medical, psychological, and financial impact bariatric surgery has for obese patients, it is critical to be able to pre-operatively identify patient factors associated with successful long-term weight loss to guide patient selection and management for those at risk for weight loss failure. The objectives of the study are to develop profiles of three %EWL classes (those achieving >80%EWL, 50-80%EWL, or <50%EWL) and compare variables that may be implicated in long-term post-operative weight loss, including demographics, co-morbidities, psychiatric history, and Beck Depression Inventory-II (BDI-II) questionnaire scores.

METHODS DESCRIPTION
This is a retrospective case series study based at a bariatric center on Oahu, Hawaii involving patients who underwent RYGB/LRYGB surgery from January 1, 2006 to December 31, 2009 and had post-operative follow-up for at least two years. All surgical candidates were evaluated by the center’s bariatrician, psychologist, dietician, and surgeon, using medical interviews/exams and patient-reported questionnaires including the BDI-II. Patients were treated to medically optimize medical conditions that could interfere with post-operative outcomes. Approximately 400 candidates underwent RYGB/LRYGB, of which 185 patients had valid pre-operative BDI-II questionnaires and had at least two years of post-operative follow-up. We included both genders, all age groups, and all ethnicities. We excluded patients who were not from Oahu island. Study variables included patient demographics (e.g. gender, age, educational level), biometrics (e.g. measured weight, height; calculated BMI and %EWL), pre-operative medical co-morbidities, pre-operative psychiatric diagnoses, and scores for each answered question on the BDI-II. To analyze each BDI-II question, we conducted an exploratory factor analysis and proposed a three-factor model derived from the questionnaire to result in three independent variables for comparison. We stratified each patient according to their %EWL measured at the two-year post-operative follow-up visit in three %EWL classes: >80%EWL, 50-80%EWL, or <50%EWL. We compared our three %EWL study groups by each recorded variable with chi-square, ANOVA, and logistic regression analyses to determine possible significant factors.

CONCLUSIONS/EXPECTATIONS
At the conclusion of our study, we expect to achieve the following:

1. Identify the pre-operative medical and psychological characteristics that impact outcomes for post-RYGB/LRYGB patients.

We aim to use these findings to help individualize pre- and post-operative efforts to optimize a patient’s chance of achieving and maintaining long-term successful weight loss after bariatric surgery. 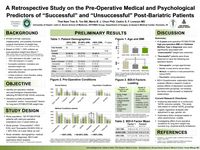