INTRODUCTION: Liver biopsy remains the gold standard for the diagnosis of chronic liver diseases. Outpatient percutaneous biopsy is generally safe with a mortality rate of 0.17% and hospitalization rate for bleeding of 3%. Von Willebrand Disease (VWD) is the most common inherited hematological disorder with a prevalence of 1-3% globally. There are 3 major types of VWD – type 1 (low levels of VW factor), type 2 (several qualitative abnormalities of VWF) and type 3 (extremely reduced or undetectable levels of VWF with low concentration of factor VIII). Type 1 is the mildest and most common form of VWD, while type 3 is the most serious, but very rare. Whether VWD increases the risk of bleeding in invasive procedures is not known. The purpose of this review is to determine the safety of outpatient percutaneous liver biopsies in patients with VWD. 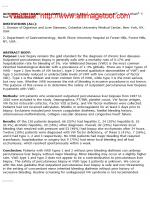