Introduction
Placing both instruments and laparoscope through one incision presents unique technical challenges. Such challenges result in a longer learning curve for SILS when compared to conventional laparoscopy. In addition, surgeons have reported higher workload with SILS. Articulating instruments may counter these difficulties but no consensus exists as to their benefit. Some authors report reduced performance whereas some show improvements over or equivalence with conventional, straight instrumentation. It was these conflicting results that the current study aimed to address. The primary objectives of this randomised controlled trial were to evaluate the effects of articulating instruments upon performance and learning curve in Single Incision Laparoscopic Surgery (SILS). The secondary outcome assessed was workload. The hypothesis was that these instruments would affect performance, learning curve and workload.

Conclusions
The use of one straight and one articulating instrument took no longer to learn, required no significant alteration in hand movements, contributed no additional workload and conferred improved performance in the peg transfer task. When its use was extended to the pattern cutting task, performance remained unimpaired. Therefore, this may represent the optimal instrument configuration for clinical SILS. 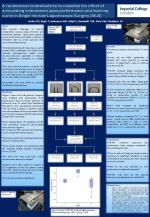