PURPOSE
Recently, Single Port Access (SPA) surgery becomes to be performed for cholecystectomy or gastrostomy. SPA surgery is performed using a single incision in the patient’s belly button. We try to remove gastric GIST using SPA plus one or two additional ports. However gastric wedge resection for GIST is variable about location or size comparing to cholecystectomy and gastrostomy. The purpose of this study is to grasp three-dimensional (3D) positional relations with abdominal wall, stomach, and GIST using 64-row MDCT to simulate single port access surgery.
METHODS and PROCEDURES
Eight patients with gastric GIST were enrolled (4 male; mean age, 66 years). After taking a foaming agent, scanning was performed using a 64-row MDCT scanner with a 0.5mm slice thickness and a pitch factor of 0.8 after intravenous injection of contrast medium at a rate of 4.0ml/sec in a total volume of 140ml. Images were obtained in the arterial phase with bolus tracking real prepare method at 30 sec after the injection and in the portal phase at 80 sec. 3D CT images in both phases were reconstructed using volume-rendering technique in the workstation. The 3D distance and direction from belly button to GIST were measured.
RESULTS
The mean diameters of the GISTs were 2.9cm (range from 2 to 4cm). Operative procedure were laparoscopic wedge resection in 6 patients (SPA plus additional two ports in 2 patients), laparoscopy assisted distal gastrectomy in 1 patient, proximal gastrectomy in 1 patient. The mean 3D distance from belly button to GIST was 10.3cm (range from 3.4 to 17.7cm). The mean direction from belly button to GIST in 3D was rotated to the 35 degrees left axial oblique than midline (range from the 50 degrees left axial oblique to 65 degrees right axial oblique than midline).
CONCLUSION
Dual-phase MDCT images clearly revealed the 3D positional relations with abdominal wall, stomach, and GIST. For the decision of SPA port direction and proper additional port site, it is useful to know the precise positional relations for preoperative evaluation. 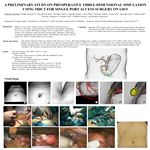