Introduction: Using a combination of autofluorescence from cells and second harmonic generation signal from collagen, multiphoton microscopy (MPM) imaging can provide detailed information on tissue architecture and cellular morphology. The purpose of this study was to evaluate the feasibility of using MPM to diagnose gastric cancer, compared with gold standard hematoxylin-eosin (H-E) stained histopathology.
Methods: A pilot study was performed between June 2009 and September 2009. 10 cases with gastric cancer confirmed by pre-op endoscopic biopsy underwent gastrectomy in Fujian Provincial Tumor Hospital. Each fresh specimen was opened by an attending pathologist. Cancer area and normal area in the specimen received examination under MPM in Key Laboratory of Optoelectronic Science and Technology for Medicine of Fujian University. After MPM examination, the same cancer area and the normal area in the specimen were received routing histopathological examination. MPM images and H-E stained images were compared by the same attending pathologist.
Results: MPM images were acquired in two channels: broadband autofluorescence from cells, and second harmonic generation from tissue collagen. Cancer cells were identified in MPM images in the cancer area of 10 specimens, which were confirmed by H-E stained slides. Normal area in 10 specimens didn’t have cancer cells in MPM images and H-E stained images.
Conclusions: It is feasible to use Multiphoton microscopy to diagnose gastric cancer. With development and equipped into endoscopy, multiphoton microscopy maybe provide a real-time diagnosis without invasive biopsy for gastric cancer in the future. 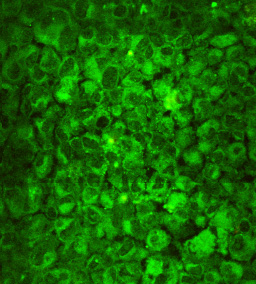