Background: Advanced endoscopic interventions such as endoscopic submucosal dissection (ESD), full thickness resection, and ultimately NOTES, have yet to be clinically disseminated, mainly due to technical challenges in optimizing endoscopic visualization and tissue traction. A simple over-tube, compatible with current flexible GI endoscopes and instruments, has been newly developed to improve visualization and tissue traction.
The Prototype: The device is a polyvinyl chloride tube (19mm OD and 22cm length) with a built-in side-channel (3mm OD). A small vertical hole is prepared in the mid-portion of the side-channel, to add lubricant between over-tube and the hollow viscus when necessitated. The over-tube is advanced under endoscopic guidance. A cutting/dissecting device is passed through the biopsy channel of the endoscope, anda grasping forceps through the side-channel of the over-tube. The strength and direction of traction is controlled by rotating the over-tube around the endoscope while keeping the forceps grasping the tissue, and also by adjusting the length of the grasping forceps inside the side-channel (Fig). The endoscope is kept un-rotated during this “rotating technique” so that the intervention is performed under constant endoscopic exposure with stabled horizon.
The Pilot Study: After confirming its feasibility on bench tests, the prototype was evaluated in porcine labs. ESD was attempted for 3cm virtual lesion on the mid esophageal mucosa, without using topical submucosal injection.
Preliminary Results: Esophageal ESD was successfully performed without any complications. The rotating technique was robust, reproducible and effective in obtaining adequate tissue counter-traction during dissection, resulted in markedly reduced operating time (less than 10 minutes).
Future Directions: This inexpensive device is practical and effective in standardizing technically demanding endoscopic interventions such as esophageal ESD. A preclinical trail comparing conventional double-channel method and rotating technique is now in the planning phase. 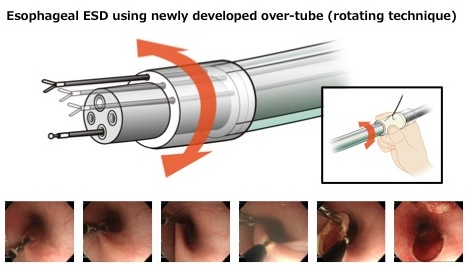