Description: The cable-driven laparoscopic clipping tool interfaces with a five axes motor stage, and mounts to a LWR (KUKA) robotic manipulator.  The first two axes drive ±90° articulation joints for improved dexterity within the end effector.  The third axis actuates a forcep to grasp and maneuver tissue, while the fourth axis advances a circular needle through target tissue.  Injection molded bio-absorbable Poly(Lactide-co-Glycolide) (PLGA) clips attach to the needle with a loop. A fifth axis shears the clip from the needle once a clasp is tightened around the clip.  EPOS2 controllers (Maxon Motors) orient DC Brush Motors through CAN communication for precise control.  A quick connect interface facilitates sterilization and easy detachment from the draped robotic positioning system.  Clip and clasp cartridges allow application of eight clips during anastomosis.

Results: Our team developed a prototype clipping tool capable of securing two layers of synthetic tissue (SynDaverTM Labs).  Figure 2 illustrates the clinical work flow to apply a clip and clasp for side to side anastomosis.  Synthetic tissue is first targeted then grasped between the forcep (2a).  Once secure, the needle is advanced beyond the tissue, and the forcep opened (2b).  After repositioning the end effector, a second tissue can be grasped, and the needle with clip advanced through both tissues.  When the clip’s T-shaped foot engages the second tissue (2c), the needle advance and forcep axis synchronize to pull grasped tissue to the top of the clipping tool (2d).  Finally, a clasp is applied to the clip securing the tissues (2e), while simultaneously shearing the clip from the needle.  Using the first prototype tool, we have successfully clipped and clasped two layers of synthetic tissue using a manual technique. 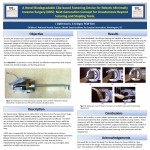