Objective:
Radical distal pancreatectomy with en bloc resection of the celiac axis (DP-CAR) has been performed for locally advanced pancreatic cancer. One of the major complications is ischemic gastropathy. A successful new treatment for a patient suffering from gastric bleeding due to a perforated ulcer after DP-CAR has been reported.

Case and method of treatment:
A 77-year-old female underwent DP-CAR with preservation of the stomach for advanced pancreatic cancer. For 2 weeks after the operation, her operative course seemed well, however, she became febrile from post-operative day (POD) 15, and had a tarry stool on POD 28. Endoscopic examination revealed an irregular deep ulceration on the greater curvature of the upper gastric body, and a CT scan showed an abscess formation around the ulceration. She was diagnosed with a perforated ulcer due to gastric ischemia. Her condition had been getting worse day by day and was accompanied with hematemesis, despite taking various medication. Not only total gastrectomy but also partial resection of the stomach by laparotomy seemed to be excessive based on her condition. Laparoscopy endoscopy co-operative treatment was adopted because it required a minimal invasive treatment.

Operative procedure:
A small incision was made on the abdominal wall, and a well adhered gastric antrum was exposed. Endoscopy was inserted via mouth and observed the gastric lumen. The role of endoscopy was illumination, observation, suction of blood and gastric juice, and to assist with needle holding. A small incision was selected on the center of the antrum, because it would require the minimum damage in order to preserve the gastric blood flow after celiac axis resection. A single 12-mm trocar was inserted into the gastric lumen directly under the endoscopic observation. A needle holder and atraumatic needle with 3-0 absorbable bladed thread were inserted via this trocar. Suturing this ulcer was performed with endoscopic illumination, and assisted by endoscopic forceps. This procedure needed a one-handed suturing technique as well as recognition of reverse alignment “mirror image” visualization. Finally, the ulceration was completely closed with 3 sutures and no bleeding was seen. The lesion in the stomach for the trocar was sutured with the layer to layer method. No drain was inserted.

Results:
After this operation, the patient’s hematemesis ceased, and she made a gradual recovery and was discharged. Unfortunately, she died 2 years after the operation because of cancer recurrence, however, she lived a full life before her final stage.

Conclusion:
This was the first reported treatment of a patient with severe gastric bleeding due to ischemic gastropathy by laparoscopic and endoscopic co-operative treatment. Laparoscopic technique, which is advancing rapidly, has not been adopted in severe cases such as this. Laparoscopic procedures should be taken into consideration not only in simple procedures but also in serious cases where minimum invasive treatment is required. 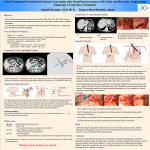