Objective of the technology

Description of the technology and method of its application

Characteristics of this “One-stop shop” technology are as follows: (1) one-time examination, (2) no-radiation exposure, (3) demonstration of liver vasculatures including, artery, portal vein, hepatic vein and biliary tract, (4) diagnosis of tumors in the liver, (5) calculation of volume of total and each segment, and especially (6) estimation of liver functional reserve in both total liver and each segment, leading to decision making of limit of resected volume of the liver.

Dynamic MRI images using fat-suppressed T1-weighted gradient-echo images with a 3D acquisition sequence were obtained before and after intravenous administration of Gd-EOB-DTPA (0.1 mg/kg body weight). The hepatocyte-phase images obtained 20 min after the injections were used for evaluation. 3D-reconstruction of MRI imaging was done by SYNAPSE VINCENT software (Fuji Medical Systems, Japan), and 3D-reconstruction was performed with manual tracing method.

Other 30 patients who underwent hepatectomy were retrospectively investigated for validation of this formula. One patient having resection volume with over the resection limit died of liver failure, however, the other 29 cases within their resection limits did not suffer from liver failure.

Our new technology of “One-stop shop” liver surgery simulation could contribute safety of liver surgery, especially laparoscopic hepatectomy, because of no radiation exposure, and accurate assessment of anatomical variations and estimation of total and regional liver functional reserve (resection limit). 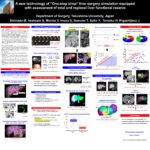