A New Perspective on the Value of Minimally Invasive Colorectal Surgery- Payer, Provider, and Patient Benefits

Background: While the clinical benefits of minimally invasive surgery (MIS) have been proven over open surgery, the overall financial benefits are yet to be fully explored.  Our goal was to evaluate the financial benefits of MIS from the payer’s perspective to demonstrate the value of minimally invasive colorectal surgery. The reduction in cost, complications, and readmissions with MIS could result in an overall benefit to the healthcare system.

Conclusions: In a commercially insured population undergoing elective colectomy for non-metastatic cases, the risk adjusted allowed costs for MIS colectomy episodes were significantly lower than open.  The overall cost difference between MIS and open surgery was almost $8,000 per patient. These results highlight an opportunity for health plans and employers to realize benefits by shifting from open to MIS for colectomy. With the increasing number of health systems participating in bundled payment arrangements and accountable care shared savings programs, the potential from cost shifting to MIS will become even more important. 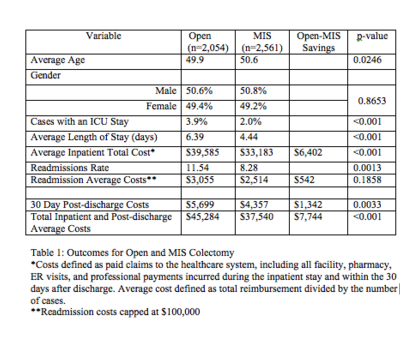