A new modality; practical in use, predicting the overall morbidity and mortality of Peptic Ulcus Perforation (PUP): A retrospective study

Background: There are different modalities, or scoring systems defined such as; ‘MPI (Mannheim Peritonitis Index), MOF (Multiple Organ Failure Score), Boey and PULP (Peptic Ulcus Perforation score) which are used in predicting morbidity and mortality rates for peptic ulcus perforation patients. But still, none of them has been accepted as the preferred approach over another. The aim of this study was to define an alternative modality which is practical in use based on the hospital database.

Methods: A total of 123 patients whom had a history of operation for perforation of peptic ulcus between years of 2010-2015 in Emergency Surgery Department of Istanbul Medical Faculty were included into the study. All the hospital database were evaluated retrospectively.

Results: Overall morbidity and mortality scores were 17% and 9% retrospectively. According to ASA scoring system; patients having ASA (score 3) had 5 times greater mortality rates than the ones below it (45% vs 9%). Patients having serum kreatinin levels above 1.50 mg/dl had %73 mortality (8/11) which was found 3 times greater than the ones below of that value. Also the mortality rates nearly doubled (36% vs. 64%) when the time past from the beginning of perforation till the admission was above 24 hours. These parameters were systasically significant having ….(…% CI) value of AUC (Area under the curve).

Conclusion: These parameters are basic and easy in application which make them practicable in use when compared with other known modalities. Evaluating this with multicentral and higher population groups may give more satisfactory results. 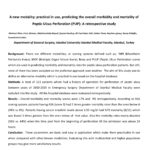