A new method for treating POP associated with LS

Despite improvements in analgesic techniques, insufficient postoperative pain control remains a significant problem, with a recent study reporting the presence of moderate to extreme pain after 79% of inpatient and 72% of outpatient surgeries.1 Opioid analgesics, though widely used for postoperative pain control, can cause undesirable side effects (most commonly nausea and vomiting, constipation, and sedation) that delay mobilization, demand more intensive postoperative care, and lower patient satisfaction. We sought to develop a sustained-release, locally-acting, non-opioid analgesic administered once at the close of surgery that could provide analgesic coverage for the entire 3-day postsurgical period during which pain is most intense.

Sucrose acetate isobutyrate extended-release bupivacaine (SABER®-Bupivacaine) contains 660 mg of bupivacaine base in a single 5 mL dose. It is instilled directly into the laparoscopic port incision(s) in divided doses at the close of surgery with a blunt-tipped applicator. Once placed, it forms a viscous depot that releases bupivacaine at a stable rate of approximately 10 mg/h over 72 hours. In addition to bupivacaine, the SABER-Bupivacaine formulation contains sucrose acetate isobutyrate, a water-insoluble, biocompatible, biodegradable esterified sugar matrix capable of trapping bupivacaine at high concentrations, and benzyl alcohol, an antimicrobial solvent. A transparent semiviscous solution, SABER-Bupivacaine is stable for 3 years at room temperature.

A randomized controlled double-blind study of 50 patients undergoing elective laparoscopic cholecystectomy compared SABER-Bupivacaine, instilled into the port incisions, with the active control bupivacaine HCl, infiltrated peri-incisionally. 30 patients in the intention-to-treat population received SABER-Bupivacaine 5 mL and 20 received bupivacaine HCl 0.5% 30 mL. Mean pain intensity on movement, measured on an 11-point, 0-10 numeric rating scale at 17 time points over the first 72 hours after surgery, was 25% lower in the SABER-Bupivacaine group than the bupivacaine HCl group (2.7 vs 3.6, P=0.024). A comparison of pain scores over time (Figure 1) showed the reduction in pain intensity was sustained over the entire 72-hour period. Median total opioid rescue medication use during this period was 24% lower in the SABER-bupivacaine group than the bupivacaine HCl group (17.0 vs 22.5 IV morphine mg equivalents, P=0.201). Plasma bupivacaine concentrations were well within established safety margins, and 72-hour Holter monitoring showed no evidence of cardiac arrhythmias. Treatment-related adverse event rates were similar between the 2 groups, with the exception of application site discoloration, which was more common among SABER-Bupivacaine-treated patients (23%) than bupivacaine-HCl treated patients (5%). 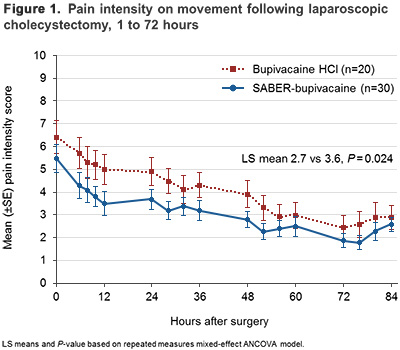